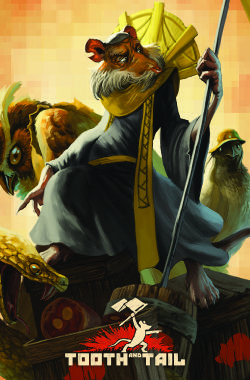 Archimedes is one of the playable commanders in Tooth and Tail. He leads the Civilized faction, represented by the color yellow. He was one of the forefathers of the Lottery System that is currently in place, which chooses who is slaughtered to feed the masses. However, over time, the Civilized became more and more corrupt until none of the Civilized ever ended up being chosen in the Lottery. Despite his despise of the other factions, he is very willing to recruit turncoats to his side. Archimedes alleges that he was the person who brought the toads and the snakes into the Civilized ranks, although whether or not this is true is debatable.