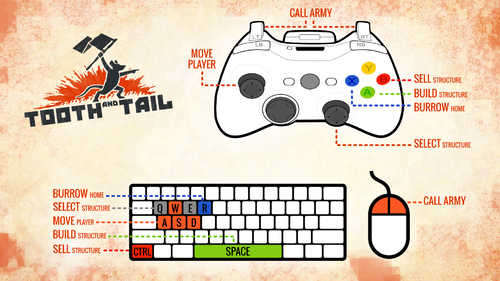 Tooth and Tail is an RTS army game where you control an army to take out the other team's mills. Unlike most RTSs out there that require you to keep tabs on all of your units, everything is done through your commander, from rallying your troops to building your mills and warrens.

The commander is the only one that you can control directly and is controlled like you would in a third-person game: W A S D (or Joystick) to move and the other buttons to perform actions (see graphic). They don't have any weapons, so it relies on its units to do all of the work. Burrow is a unique ability that they have that allows them to get to any of its mills when in danger or if it is done scouting a base and needs to get back quickly to make a counter.

An additional and critical difference between Tooth and Tail and other RTS games, is the randomness of its maps. Maps are procedurally generate providing various starting locations for neutral gristmills and campfires as well as varied terrain. Player starting locations are typically far apart but can occasionally be found within close proximity to one another.

The mills are the main goal of the game. If you lose all of your mills, you lose. They are the only place where you build farms, which are your source of food. Food is your main currency in the game, everything is bought and sold for food. If you can't make food, your army "starves" and you need to make another farm quickly before you starve to death and lose. Careful though, each farm can only produce a certain amount of food. After that it becomes barren and you can't build another farm on it. There is no way to refresh the farms either, they stay completely barren, even if it switches hands.

Before the game starts, you can choose up to six units. They can be any combination of the Tier 1,2,3, and buildings. In the game you build the buildings and warrens by moving your commander to where you want to build it, selecting that unit or building, and using the "build" command. Units aren't bought directly, but come out of their warrens automatically when you have enough food. Three units come out of tier 1 warrens, 2 out of Tier 2, and 1 out of Tier 3. Each unit costs food though, so don't think you have an endless supply of units.