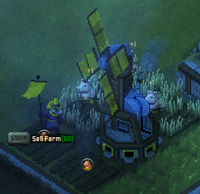 The Quartermaster next to a farmhand pig

Gristmills are a crucial part of the game, without which the player can't build any additional units as well as causing Units to starve (thereby losing the game). Gristmills are necessary to produce food, which is needed to build units, but also for buying farmland, which costs 60 "meat". A gristmill has 8 farmland tiles that surround it available for purchase. Once bought, the farmland Pigs will appear, working the fields. Although Pig's do little damage they will also defend the mill in case of an attack, acting as additional defense in the early stages of the game. Players can buy unowned gristmills as well as the 8 surrounding farmland tiles in order to expand their territory and food supplies. A strategic placement of the units is necessary to avoid being run over by the adversary forces. Players should locate the enemy gristmill early and scout often to keep track of opposing farm count. It is important to place early warrens around the players gristmill to act as a shield for the relatively low health Pigs.

Unit costs vary by tier, with Tier 1 warrens costing 60, Tier 2 costing 120, and Tier 3 costing 180 meat, it should be noted that these costs reflect only the BUILDING of the warrens unit costs are 20, 60, and 180 respectively.