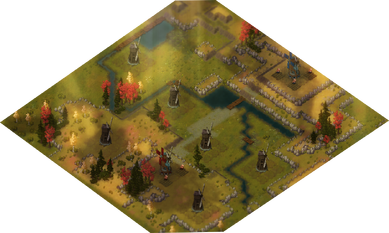 Maps in Tooth and Tail are randomly generated. This forces players to adapt to situations they may not have foreseen such as; a lack of easily accessible expansions, an easily defend-able position, or a much closer/further proximity to the enemy then anticipated. Due to the randomness of maps players must adapt their chosen units and fortifications to the battlefield in order to take advantage of the environment. Maps also begin hidden from players, only outlining the borders, thus it becomes imperative to scout the map early in order to understand the exact layout and prepare your forces to better manipulate the environment.

Despite the randomness of the maps, there are a few points of reliability between them all. If playing in a 2 player setting all maps will contain between 7-9 gristmills as well as ranging from 40-50 tiles in length and width. 3 and 4 player maps will contain 10-13 gristmills as well as range from 45-55 tiles in length and width. This means that players should have a relative idea of how much of the map they should scout before focusing on engaging the enemy, as once all gristmills are located the primary points of contention and their dis/advantages can be played around.

Due to the uniqueness of Tooth and Tails map generation, it is advised that players choose a lineup that, while has a game plan in mind, accommodates potential map features. These features if ignored can be used by an enemy with an inferior build to either level the playing field or create an advantage, that would otherwise not exist on a different map. Good players will also understand that their overall strategy must be flexible enough to change based on features of the map, i.e. a close enemy base proximity may warrant an aggressive early game push, and hinder a longer tech tier 3 focused strategy. Likewise an opponent in a highly defendable position may require you to focus on exploiting nearby expansions or "pocket" campfires rather then attempting an early game rush.

Campfires can be found on most maps, and provide players with an additional source of automatic food generation. Campfires provide up to 300 food, and produce it at a rate of 1 food per second. However if a player takes control of a campfire from an opponent, the maximum food count does not reset. This means that if an opponent has drained 250 food, any new player who takes control of the campfire may only receive up to 50 food. Once all 300 food is used, the campfire becomes unusable and no longer provides vision. Campfires can provide a safe and easy way to expand early, and can provide another avenue for you commander to burrow to. Perhaps the strongest feature of a campfire is its ability to spawn in tricky to find locations, allowing players who thoroughly scout the map to take advantage of hidden ("pocket") campfires. Players can determine the rough level of food remaining on a campfire by the size of the meat present above the pit. at over 200 the meat is large, decreasing in size to nearly nothing at under 100 food.

Roads allow units to move at an increased pace, providing players who use them opportunities to out maneuver or out trade opponents. Maps that feature roads that connect basses shouldn't be afraid to utilize the speed boost to play aggressively if connected to enemy gristmills or look to setup expansions that are have roads leading to their gristmill.

Water is a map feature that slows down any unit that chooses to wade through it by a substantial amount, it also prevents commanders from burrowing or building structures. Water can be extremely strong defensively and thus should be played around accordingly. In some cases players may find bridges connecting two land masses over water, these bridges allow normal movement and burrowing, though players are still unable to build on them. Flying units are unaffected by water and thus are ideal when fighting on maps that feature a large amount of it. 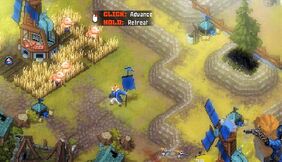 Ramps that lead to hills

Hills appear on the maps as raised terrain typically surrounded by impassible cliffs, or gentler slopes. Hills are where players can find utilize the high-ground as players on the hill can see unobstructed around them, while players below the hill must first walk up it in order to dismiss the fog of war. While hills provide a powerful vision advantage, this advantage can be overcome in two ways. Firstly flying units are able to see unobstructed at all times, and thus a map featuring many hills may be overcome with pigeons, hawks, balloons, or owls. The second way that high-ground advantage can be overcome is by manipulating a mid-late game commanders high health pool. By your commander up the hill unaccompanied a player may scout out what awaits them on the top, they can then call in their nearby army to attack up the hill unobstructed. Both strategies can lead to vulnerabilities, as losing the generally low health flying units can cripple your attack, and losing your commander can destroy any control you have over the battle. 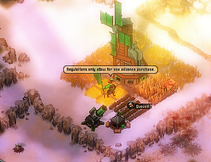 The quartermaster surrounded by Impassable cliffs

Sometimes players may come across areas of the map that are inaccessible on foot, these sections of the map while typically negligible still provide advantages and disadvantages to players so inclined to use them. For example, should a player find a forest enclosing their base, they may use fortifications to easily fend off attacks, using the forest as a natural and indestructible wall. On the other side, should an enemy be surrounded by forest, a player can use their natural inclination to defend to build flying units capable of bypassing any defenses and attack unguarded areas. One final note about impassable terrain, is that while your ground units must move around it, your flying units do not, this may lead to your army being separated and unintentionally weakened as you move across the map. To counter this, when a large cliff or forest is on the map keep an eye on all your units so that no group gets too far removed from the main army.