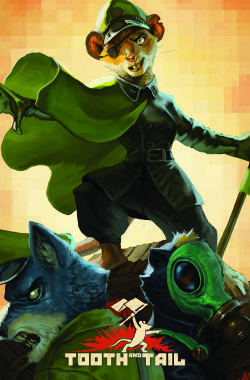 The Quartermaster is a playable commander in Tooth and Tail. Her units currently carry the colour green.

She leads the K.S.R., a secret police tasked with keeping peace in the nation. The K.S.R. became involved in the fighting to quell the Revolution, but now fights to bring peace to the nation, no matter what the cost. The Quartermaster often uses Military style units in combat; the gas mask wearing AFB, the Sergeant Wolf, The medics, barbed wire, artillery cannons, and the fighter falcons. The Quartermaster lives by a number of rules that she can be seen quoting during missions, if these are her own rules or taken from somewhere else is unknown. Her network of spies within other factions and her research into new military technology is prevalent during her campaign though if she began utilizing these assets before the revolution is uncertain. While an intimidating figure the Quartermaster seems to care about helping the people survive, though she shows disdain for the Commonfolk due to their stealing of supplies.